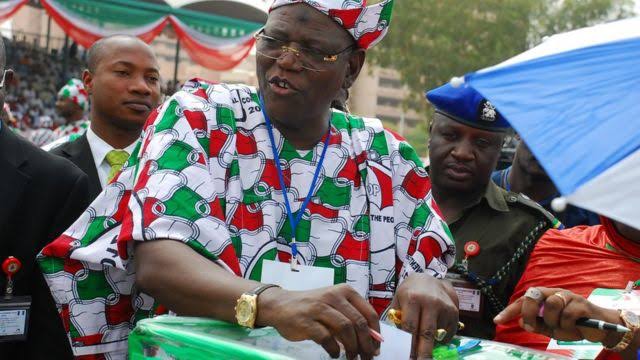 All Progressives Congress, a party of select individuals in Nigeria – Sule Lamido

He noted that the Peoples Democratic Party (PDP) is the only pan Nigerian political party built by the people and owned by the people of Nigeria.

Lamido who spoke on Sunday in Dutse, Jigawa State after the successful conduct of the PDP state Congress said the ownership structure of APC is the reason for the colossal failure of the Buhari led administration in almost all facets of our national life.

Lamido said “PDP is the only party which has the kind of capacity to lead Nigeria and Jigawa State because it is a party that is owned by the people not a party that is built around one personality.

“It has produced so many leaders, Presidents, Governors, Parliamentarians, ministers, commissioners including contractors. “Remove the PDP’s virtue in Nigerian history there would be no Nigeria because PDP is Nigerian History.

“Today, Nigeria is going through some turbulence; insecurity, poverty, division, hate and what have you.

“Mutual respect, firm believe in one another. Only PDP can restore Nigeria.”

“Jigawa chapter of the PDP is going to be one of the building blocks to restore Nigeria to what it was 8 years ago, when there was security, stability, fuel, power, there was infrastructure development, stability, love, mutual respect, there was everything.”

He asked the new executives to convey the party’s appreciation to the working committee and the NEC for taking the pain to go through the court processes which he said has been laid to rest.

The chairman of the congress Electoral Committee Dr Umar Ardo,said “From what we have seen here from yesterday those who contested the elections of the state executives of Jigawa State PDP, were unopposed, that is to say there was consensus in the contests and that is the best for democracy. “But in conformity with the laws of the country we have allowed candidates to cast their votes and we inspected each and every ballot box to ensure that each office is contested for and we have ascertained that.

“In view of that we are going to declare the candidates who have emerged victorious in this election.

The new Chairman appreciated everyone and promise to carry everyone along. He assured of delivering Jigawa State to PDP in 2023.

It could be recalled that the Jigawa State PDP Congress was enmeshed in crises when a faction led by the former Governorship candidate of the party in 2015 and 2019, Aminu Ibrahim Ringim went to court to challenge the Sule Lamido Led faction with a court injunction preventing his faction from continuing with the party’s local government congress.

However a high court sitting in Dutse presided over by Justice Musa Ubale had rescinded its earlier order restricting the Sule Lamido led faction from conducting the local government and state congress elections.

In a fresh court order,
Justice Musa Ubale struck out the case and ordered the faction of the defendants (PDP and Lamido) to go ahead and conduct the party’s congresses.

The court’s judgement stated that,” the matter deals with the congress of the PDP to choose or elect it’s leadership in the ward, local government and state levels in Jigawa which is purely an intra-party dispute and thereafter not Justiciable”, it stated.

The PDP state congress which took place on Sunday may have put to an end the lingering crises between the Sule Lamido led faction and that of Aminu Ibrahim Ringim.